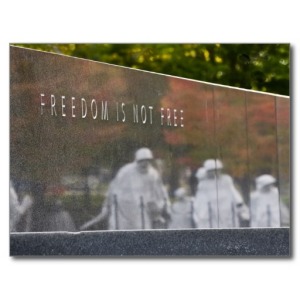 On the C.B.C. last night I heard the Korean War referred to as the “Forgotten War.” It was not even acknowledged as being a war. It was referred to as a “police action.”

516 Canadians died. 26,000 Canadians volunteered to serve with U.N. forces in South Korea. 1,042 Canadians came home seriously wounded. Romeo Daley, 81, was one of those volunteers. He says in the few schools he gas gone to to speak about the Korean War teachers can’t even tell him when it started.

Our federal government has named 2013 as the year of the Korean War veteran. Although an armistice was signed between North and South Korea in 1953, they are still in a state of war because no peace treaty has been signed.

I thought in light of how the Korean War has become the “Forgotten War”, I would help keep its memory alive by sharing my story about a native Korean War veteran I met.

I was a missionary there teaching English as a second language at the International English School in Kangnung, South Korea. I was one of a dedicated team of people, who it was and always shall be both my honour and privilege to have served with.

I was the only one who had a shortwave radio. Our friends, family and fellow church members were concerned about our well-being as hostilities increased between North and South Korea. Before my arrival in October 1995 South Korea  was on high alert. There was a strict curfew that was lifted before my arrival. Streets were patrolled by the Korean Army.The threat always remained of an attack from North Korea.

At local beaches we were all under the watchful eye of Korean soldiers with machine guns. They were on the look out for any North Korean attack.

I listened for any news from the B.B.C. Finally, the announcer said, “Tensions increase between North and South Korea, Now, to the cricket scores.”  At the international level the situation in Korea was of little importance. It was considered a local dispute that did not touch many lives in Britain or the world. Not much seems to have changed.

To give you a better idea of how volatile the situation had become between North and South Korea, I have added these historical facts.

With this background information you will have more of an understanding of just how stressful and concerning the situation had become for the people of South Korea and us.

Why has the Korean War become the “Forgotten War”?

How can we keep the memory of the Korean War alive?

In the fall of 1995, I am serving as a missionary in the city of Kangnung, which is on the eastern seaboard of South Korea.

I meet a Korean man who tells me he is a Korean War veteran. He is using his arms to propel himself on a wooden board with crude rubber wheels. He has only stumps for legs. He is begging using a small cup. He is only a middle-aged man, but he looks more like eighty. I doubt that he gave little thought to what his country was asking of him when he was drafted. Here he is over forty years later, no longer the youthful soldier. There is no light of joy in his eyes.

People pass by and put money in his cup. It is always done with the greatest of respect, bowing as the money is given. The men, women and children who give the soldier money feel it is their way to say “thank you” for his service.

The government gives him no pension for his years of service. He supports himself through begging and selling a few items such as pots or packaged food.

He invites me to his home. In Korean culture, to welcome a stranger is considered an act of honourable hospitality. He offers me what little he has. His home is no more than five feet by three feet. The door is a curtain. He uses a hot plate to cook on. He barely has room for a Korean yo, which is a thin mattress. He has a portable gas heater, but he still rubs his hands to keep warm.

Seeing his plight and that of so many others in South Korea living in poverty without any government support, I take time to reflect upon the blessings we enjoy in Canada.

I thank veterans and those who are active soldiers every opportunity I get for their service.