Are we losing the meaning of Thanksgiving? 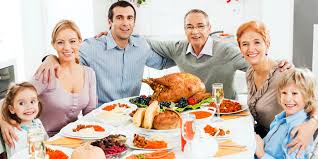 Many would be surprised by me asking such a question. You know that Thanksgiving is a time of giving of ourselves to others. However, if we are to believe the media that’s not what you’re really interested in. I could only find a few programs on Canadian television focusing on Thanksgiving. While there is an American Thanksgiving in November, I was deeply concerned to find all kinds of horror movies on both American and Canadian television. The program executives would contend they are giving what the public demands. What I won’t accept is that all of you want to watch horror movies to the exclusion of watching family programs like The Waltons, which a Thanksgiving episode part two is being aired on Vision TV today at 5:00 p.m. EST., 2:00 p.m. Pacific Time.

Thanksgiving should be about spending time with your family and friends being thankful for the blessing you have in one another. This is a time when we share the replenishing joy of being with people who care about us. We may play games like I did. I played James Bond 007 games all night long one time when I visited my brother. Others may listen to music or share jokes and stories of past Thanksgivings. We travel often thousands of miles for this occasion. It’s a time of coming together focusing on that enduring word of family, and all it means to us.

Many of us who are normally health conscious abandon our diets for a few days to avoid feeling deprived. We eat too much turkey or ham. We indulge in pumpkin pie with ice-cream, whipped cream or both.

Reflecting upon past Thanksgivings memories of eating succulent turkey, mouth-watering Amaretto stuffing made by my sister, Valerie, and scrumptious pumpkin and apple pies made by my mother, come to mind. I confess though I’m much like that Scottish minister, Rev. Dr. Peter Marshall, when he said to his wife, “Catherine, I’ll have to ask you to give the blessing. The Lord knows I’m not thankful for turkey hash.” After weeks of how many different recipes can you come up with using turkey, your thankfulness for it can wear off.

This year Karen and I have opted for cooking small chickens. Yes, we will still have cranberries and pumpkin pie. Then, it’s back to striving for a healthier diet.

There is a dear Christian brother I know named Suresh. He’s a pastor in India. Orphan children are eating cheap unhealthy rice. That’s all he can afford for them. He receives no foreign aid. Here am I not being thankful for turkey hash. Shouldn’t I and those of us who have more than enough food to eat when millions go hungry be thankful for what we have? I provide a link below for information on Suresh’s orphan children for a fundraiser on You Caring that has reached $1,290 of its $2,500 goal. I know he would be thankful for anything you could give.

We don’t have to go overseas though to see the need. It’s all around us if we take the time to really look. It’s there in your unemployed neighbour. It’s there seeing a teenager who is homeless. It’s there in the prostitute selling her body. It’s there in a teenage gang member headed for imprisonment or death far too early. It’s there in the person contemplating suicide, because life has become far too tough to go on. It’s there in a colleague who needs your help pulling out from burnout. It’s there in the mother in Ontario on welfare, who has to make the choice of having an apple or a sandwich, but not both because she wants her child to have something to eat too. Need is there in those who are hurting, lonely, abused, depressed and in those with post traumatic stress. It takes no holiday. It’s present 24/7.

This Thanksgiving think of how you can make a difference in people’s lives. Volunteer at a food bank or a soup kitchen such as the Lord’s Kitchen in Timmins, Ontario, or choose to donate to causes like these. Every Thursday and on holidays they feed those in the community who are homeless, on low incomes or people who simply want to enjoy being in a sharing community. They give these community members something that is also important. They offer them the life-giving blessing that comes from them being in community. They are around those volunteer staff who know that true community is seeing the need and doing something about it. Here’s a link to a short documentary on this committed group of people and those they serve. Until Christmas they will be having their once a year fundraiser for their needs.

I encourage you to think of one way you can help another person. Then, like the Nike slogan says, “Just do it.” That’s far more enriching than being engrossed in the darkness of TV media.

My fellow Canadians, I pray for God to shower you with His richest blessings, not just at Thanksgiving, but 365 days a year.

Kevin and Karen Osborne are Christian pastoral counsellors and psychotherapists. Kevin is studying to become a psychologist and professor of Psychology. He feels called to also be a chaplain. We have started You Can Hope Again Counselling. Karen enjoys doing cross-stitch while I like writing and singing songs. Karen makes me laugh when she sings the kitty bed-time song saying, “It’s that time. It’s the bestest kitty time of the day!” Kevin enjoys teasing the kitties and making them do kitty dances with music. Their kitty, Catherine, loves it when kitty daddeh sings All Things Bright and Beautiful. Kevin likes doing impressions. He tells children’s stories and helps others with their problems using his hand puppet, Dr. Teddy, who is a therapy bear. He is a partner with us in our counselling practice.We are available to assist with worship and preaching to give busy pastors and ministers a much-needed break. We offer in-office, and phone counselling to anyone in the world.