Sonic the Hedgehog and the Inspiration to Write “22 Life”

Sonic and Tails from the ABC Saturday Morning cartoon, “Sonic the Hedgehog,” also known to fans as “Sonic SatAM”

It is no secret for those of you who know me well online and offline that I am a HUGE fan of “Sonic the Hedgehog.”

Sonic the Hedgehog and Miles “Tails” Prower have influenced my life greatly from childhood to adulthood. Sonic’s confidence and Tails’ heart is what really spoke to me along with the special gifts they had. Certainly we can’t forget about the fact that they were on the side of good, the heroes!

Over the weekend, I was reminded again of how important and meaningful the “Sonic the Hedgehog” franchise has been to me.

This young man, @CruiseCarter on Twitter asked me to draw a picture of him hanging out with Sonic. He also drew a picture of himself and Sonic. This reminded me of when I was younger and needless to say I had a lot of fun attempting to draw Sonic. In my humble opinion, I think I’m better drawing my own characters like I did for “22 Life Lessons fro Personal Growth.” 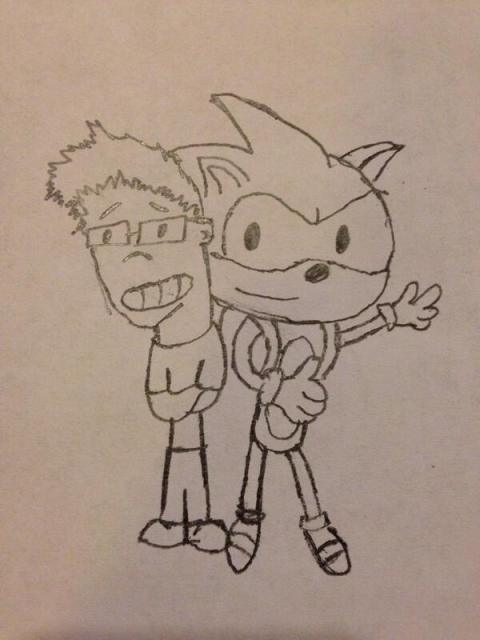 My Drawing of “Sonic” with @CruiseCarter on Twitter (c) Cartoon Daily News, 2013

After all, I related to Sonic in the sense that he ran when he needed to and he ran incredibly fast. Sonic never really worried about being picked on or called names. He was, and still is, the hedgehog with an attitude!

In essence, “Sonic the Hedgehog” was a person that I totally wished I could be like.

In the book, “22 Life Lessons for Personal Growth” I talk about desiring to be like some of my favorite cartoon characters. I desired to acquire some of the same characteristics that they embodied: a kind of bravery, confidence, self-esteem, love and hope that my favorite heroic characters in cartoons and comics had!

Needless to say, I knew I couldn’t possibly be “Sonic the Hedgehog.” Instead, I had to go with what was real and that was hard, very hard!

I mean, back then, at the time that I sat there and observed and appreciated the awesomeness of “Sonic the Hedgehog,” and the fact that he went on incredible adventures, fought and defeated enemies and got the girl while I lived the life of the bullied, socially awkward kid, who could blame me for desiring what Sonic had!?

A lot of dark times in my childhood were cleared up by those times that I was, by the Grace of God, able to escape the harshness of the world and watch my favorite hedgehog on television, play the games and read the comics.

Nothing necessarily changed until my Faith in God and Christ changed, the realization that I could be better than Sonic actually! I could be the real thing! Only thing, I wouldn’t be able to run 0-60 in seven seconds or less. But, I was pretty sure I could live with that.

I could have real strength, real confidence, real love, real hope, real LIFE…only place it comes and it could EVER come from is my relationship with Jesus Christ!

Sonic the Hedgehog still played a pretty important part in the book in the sense that it, to me, was God’s way of showing me the way to Him as a kid. It was during each episode I ever saw that I found those “grace moments,” the periods in which I KNEW that God never just left me hanging. The same goes for other cartoons and comics I ever got involved with.